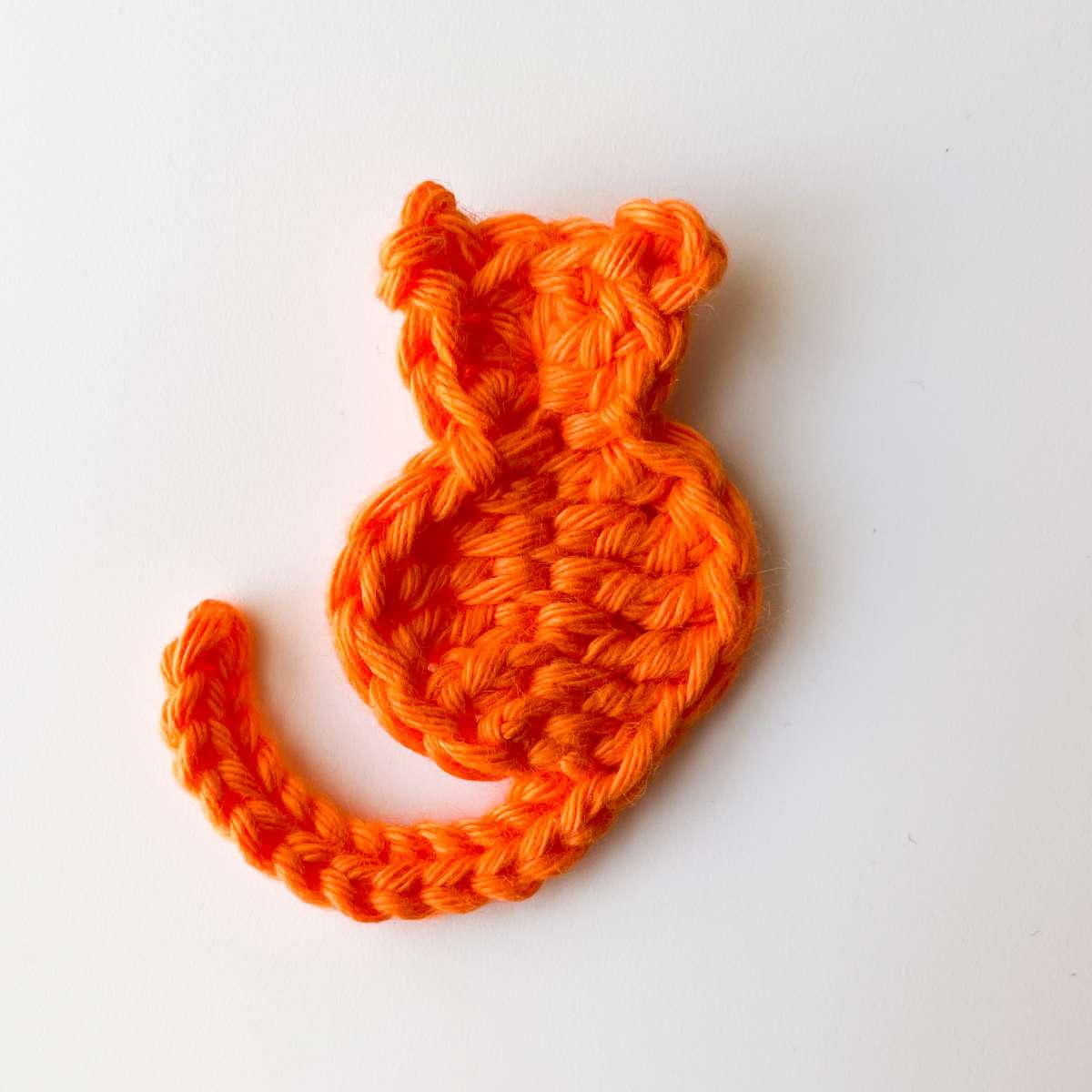 I love cats!
The ones in the photo are Pompeo and Minerva

So, since I love cats, I wanted to make a crochet Cat Applique to attach to some projects. 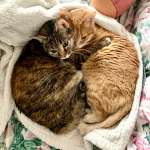 I checked online among free and paid patterns, but I didn’t find exactly what I was searching for, so I decided to create my own pattern and I’m happy to share it with you.

This pattern is totally free, but it’s intellectual property of Elendipity.
You can use it and, of course, you can sell the final products you create, but you cannot sell the pattern or any alteration of the pattern.

If you can share the pattern for free, but remember that you should also always credit Elendipity (as pattern creator) whenever you create and/or sell it and/or share it.

Feel free to tag me on my Instagram if you create it, I would love to see your works!!

The Cat Applique is worked all with one foundation chain, no sewing is involved.

In this video that I recorded about how to create an oval, at the minute 02:43 you can see how to work on both sides of the foundation chain.

I bought the yarn at Hobbii.

Here below the list of the stitches (US terminology) that you are going to use for this project.

Here you can find the pattern written all together.

After this, below, you will see the pattern with the photos step by step.

– PATTERN WITH PHOTOS STEP BY STEP

Here you will see the pattern with the photos step by step. 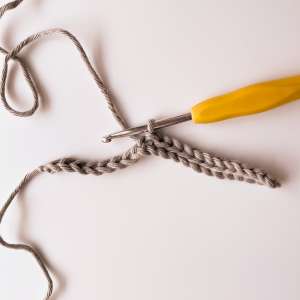 Now you will do HDC 1 and insert the stitch marker as your first stitch of the cat’s body. (PIC) 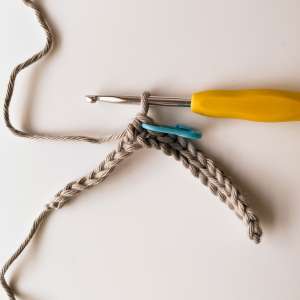 And the first half of the body is done, you will move to the last CH where you will create the head. 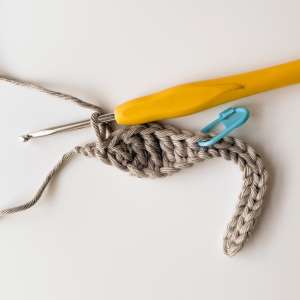 I will explain better the meaning of “3CH – SS 1”: these are the two ears of the cat.

After you worked the 2 DC in the last CH, you do 3 CH (PIC) and you will join the 3 CH with a SS where indicated by the needle (PIC).

And your first ear is done (PIC), now you go ahead with the pattern. 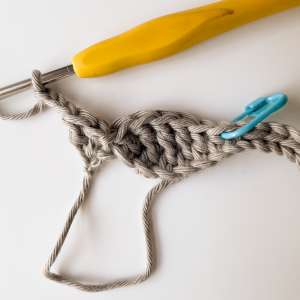 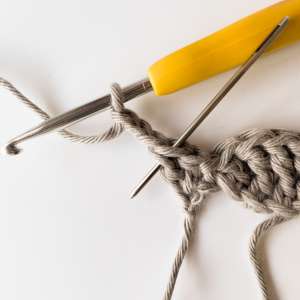 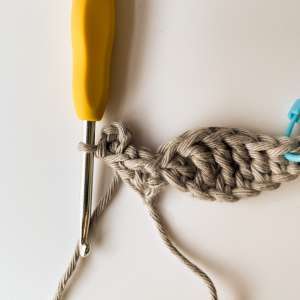 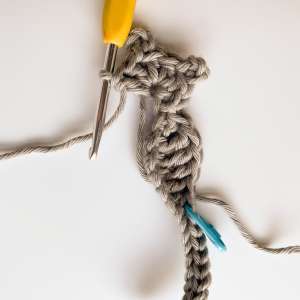 Now you will work the second half of the body, working on the other side of the foundation chain.

The first st (SS) will be worked where indicated by the needle.

So it will be: 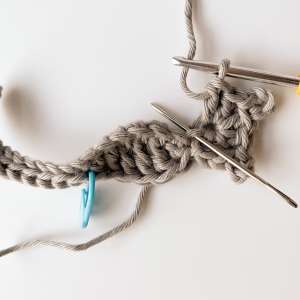 After you’ve done the last st (HDC), you will cut a little bit of a tail to weave in.

Take the darning needle and insert it where indicated. (PIC) 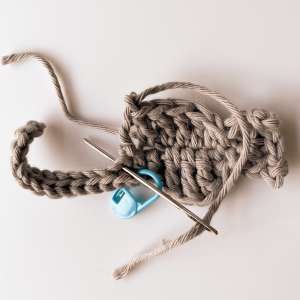 Weave the ends (this one and the initial one if you didn’t bring it with you before) and your applique is done! 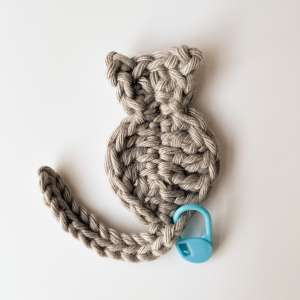 You can now remove the stitch marker and sew your applique on your projects: it can be attached to a purse, to a bag, or you might want to make it as a pin for your coat.

I also used it as a base for a Granny Square, you can read the free pattern at this link!

Here some of the ones I did! 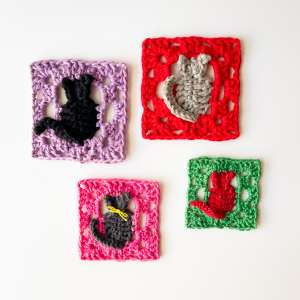 I hope you enjoyed this Free Pattern 🥰

I have other many patterns available that you can find at this link.

Don’t hesitate to contact me if you need any explanation for the pattern – you can write me at info@elendipity.com.

I also offer crochet lessons (both in person or online) if you need some help with crochet creations and reading patterns.

You find all the info at this link.

Feel free to tag me on my Instagram if you create it, I would love to see your works! 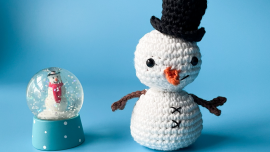 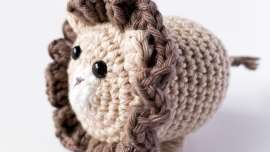 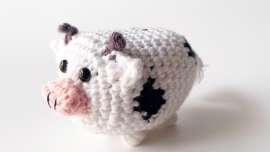 facebookinstagrampinterest
Elendipity © 2022. All rights reserved.
We use cookies on our website to give you the most relevant experience by remembering your preferences and repeat visits. By clicking “Accept All”, you consent to the use of ALL the cookies. However, you may visit "Cookie Settings" to provide a controlled consent.
Cookie SettingsAccept All
Manage consent

This website uses cookies to improve your experience while you navigate through the website. Out of these, the cookies that are categorized as necessary are stored on your browser as they are essential for the working of basic functionalities of the website. We also use third-party cookies that help us analyze and understand how you use this website. These cookies will be stored in your browser only with your consent. You also have the option to opt-out of these cookies. But opting out of some of these cookies may affect your browsing experience.
Necessary Always Enabled
Necessary cookies are absolutely essential for the website to function properly. These cookies ensure basic functionalities and security features of the website, anonymously.
Functional
Functional cookies help to perform certain functionalities like sharing the content of the website on social media platforms, collect feedbacks, and other third-party features.
Performance
Performance cookies are used to understand and analyze the key performance indexes of the website which helps in delivering a better user experience for the visitors.
Analytics
Analytical cookies are used to understand how visitors interact with the website. These cookies help provide information on metrics the number of visitors, bounce rate, traffic source, etc.
Advertisement
Advertisement cookies are used to provide visitors with relevant ads and marketing campaigns. These cookies track visitors across websites and collect information to provide customized ads.
Others
Other uncategorized cookies are those that are being analyzed and have not been classified into a category as yet.
SAVE & ACCEPT